We went to another gallery after the rubbish show and a snack.

There were lots of things on the floor that looked a bit like popcorn and we weren’t allowed to touch them. 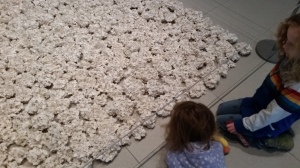 The big number dish was my favourite and I liked the 1s and 0s.

There were some little people and I asked mummy what they were doing as I didn’t know. Mummy said “what do you think?” and I didn’t know. I thought maybe one was doing yoga or dancing.

Then we went to the indoor gardens and I had a mint choc chip icecream which was yummy, and an explore round the gardens. We saw the fountains and a bike show where they go up and down ramps jumping and spinning. That was very cool.

We saw another show with foxes with hats and got a badge. There were some cool shells, fossils and crystals in another room too.

On the train home I said “and we’re still in England – we’ve not even been on a plane!” It was like a mini holiday for the day.